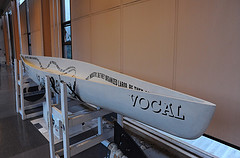 That’s right: concrete used as the building material for boats. It all happened in June when the American Society of Civil Engineers hosted its 22nd Annual National Concrete Canoe Competition. Though rain, thunder, and lightening were present, the competition went on at Lake Nicol in Tuscaloosa, Alabama. Twenty-two top engineering colleges and universities entered the event, but the University of California, Berkeley pulled off the win.

The competition is for civil engineering students and provides them with a real-world application of the engineering principles they learn in the classroom. The competition also builds teamwork and project management skills and challenges the students’ knowledge, creativity, and stamina. Finally, the star of the show, the concrete itself, is proven as a useful and versatile building material.

In order to go to the competition, teams must qualify in one of the 18 conference competitions held around the country. Qualifying teams gain academic scholarships totaling $9,000. The winners of the national competitions are holders of the America’s Cup of Civil Engineering. This year, the competition changed a bit when organizers told teams they could only build hulls to the specifications and dimensions in the rule book. Working within limitations challenged students to think creatively on ways they could gain an advantage over other schools.

In their fifth win in the competition’s 22-year history, UC Berkeley took home the cup for the Bear Area, a 230-pound, 20-foot-long canoe. It was Berkeley’s first championship since 1992. The canoes that came the closest to overtaking the Bear Area were built by École de Technologie Supérieure in Montréal, Canada, and California Polytechnic State University in San Luis Obispo. ETS’s Vintage, weighing in at 190 pounds and 20 feet in length, came in second place. Following in third was Cal Poly’s 246-pound, 20-foot-long canoe, also christened the Vintage.