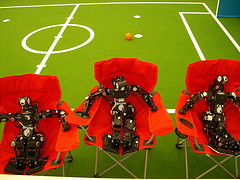 It’s the ultimate man versus machine. Soccer-playing robots are being designed to beat their human counterparts. But don’t worry, this technology is far from perfected.

Robot soccer competitions have been occurring since the mid-1990s, and organizations such as the Federation of International Robot-soccer Association (FIRA) and the RoboCup Federation are promoting advances in artificial intelligence and robot design through these competitions. The hope is to achieve a robot team that can defeat the FIFA World Cup champions by the year 2050.

The RoboCup competition and the FIRA RoboWorld Cup are both international competitions held every year between teams from different countries, many hailing from colleges and universities. Each team designs a robot to compete in a league, like the simulation league, small-sized robot league, and the humanoid league. So far, the robots have advanced from wheeled participants to bipedal players that fight for the ball and score goals. The next step, researchers say, is to get the robots running like humans, though the rough terrain of grass fields proves to be a difficult challenge.

The U.S. RoboCup 2009 was held in May at Harvard University, with the University of Texas at Austin taking top honors and the University of Pennsylvania coming in second. The 2009 international competition took place in Graz, Austria, in July, where 3,000 participants from 40 different countries competed.

Soccer is the perfect testing ground for robots because it involves a variety of functions, such as movement, vision, and strategy. Although the robots are designed for the soccer field, the research put into the competitions can have a larger impact. Robot technologies could be used for simple tasks around the house (think the Roomba, but more advanced) or in scenarios, like rescues, where robots can be used instead of risking human injury or death.