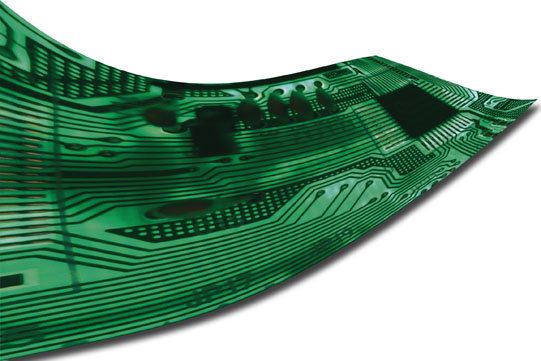 Electronic components historically have been flat and unbendable because silicon, the principal component of all electronics, is brittle and inflexible. Any significant bending or stretching renders an electronic device useless.

Huang and Rogers developed a method to fabricate stretchable electronics that increases the stretching range (as much as 140%) and allows the user to subject circuits to extreme twisting. This emerging technology promises new flexible sensors, transmitters, photovoltaic and microfluidic devices, and other applications for medical and athletic use.

The partnership—where Huang focuses on theory and Rogers focuses on experiments—has been fruitful for the past several years. Back in 2005, the pair developed a one-dimensional, stretchable form of single-crystal silicon that could be stretched in one direction without altering its electrical properties.

Next, the researchers developed a new kind of technology that allowed circuits to be placed on a curved surface. That technology used an array of circuit elements approximately 100 micrometers squared that were connected by metal “pop-up bridges.”

The circuit elements were so small that when placed on a curved surface, they didn’t bend, similar to how buildings don’t bend on the curved Earth. The system worked because these elements were connected by metal wires that popped up when bent or stretched.

In the research reported in Proceedings of the National Academy of Sciences (PNAS), Huang and Rogers took their pop-up bridges and made them into an “S” shape, which, in addition to bending and stretching, have enough give that they can be twisted as well. “For a lot of applications related to the human body—like placing a sensor on the body—an electronic device needs not only to bend and stretch but also to twist,” says Huang. “So we improved our pop-up technology to accommodate this. Now it can accommodate any deformation.

Read about advances in electronics at www.GraduatingEngineer.com.